Huion H420 vs Wacom Intuos Art – for Newcomers and Amateurs

It was rather interesting to compare two low-cost drawing tablets – Huion H420 vs Wacom Intuos Art – and to find out their peculiarities to share for making a right choice from the perspective of value for money (Wacom Intuos Art is twice and a half more expensive that Huion H420).

Both units have no display, so, it is possible to watch your work only on the PC or laptop’s monitor. The gadgets have standard pressure sensitivity, but Huion H420’s resolution is higher – 4000lpi versus Huion H420’s 2540lpi. That’s why Huion H420 allows making more detailed and sharper images.

The tablets are compatible with the most widespread graphics apps and are great for Photoshop or Coral Draw beginners, for example. They are comfortable to use for both righties and lefties. Both gadgets are not very sturdy. They are made of plastic and flex under pressure.

Wacom Intuos Arthave’s pen has no tilt and shading option, but it can be customized to work like brush, pen, or chalk. Huion H420’s pen is basic and has no eraser as other Huion’s models. However, it comes with extra tips and a metal piece to take them out.

Both styluses are battery less and come with no stylus holders, but they include some various nibs for different styles of drawing. 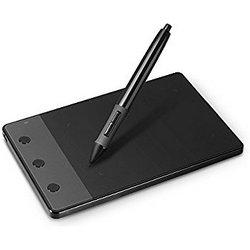 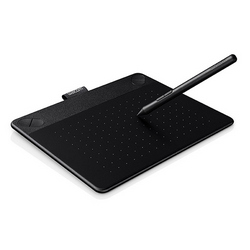 The Wacom Intuos Art review is about a mid-level tablet for amateurs, aspiring artists, and photographers. It features a lot of interface customization settings, downloadable software, and useful doc...