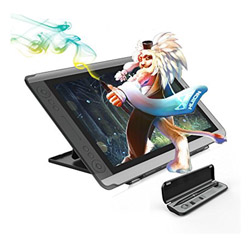 As a 16-inch drawing tablet with a Full HD screen, the Huion Kamvas GT-156HD V2 seems a good option at its current price. It has multiple features, looks and feels good, and is compatible with various OS and software. At the same time, it’s not the least expensive in its category (it belongs to a middle-class category) and misses some auxiliary functions that its competitors provide.

Let’s have a closer look at the Huion GT-156HD V2 and see if it’s worth its price!

The tablet is supplied in a large box featuring multiple accessories including the CD with the Huion Kamvas GT-156HD V2 drivers. Never mind if there’s no CD slot in your PC, the drivers can be installed within a minute or two from the Huion’s website.

The Huion has included a one-to-triple cable with this tablet making the setup a breeze. Plug in the micro HDMI into the tablet’s port, and a USB-C or HDMI into your laptop or a computer. Hook up a power adaptor to the third connector to power your tablet.

I charged the stylus and turned on the tablet. Then I selected the Krita software to test it. The app interface loaded quickly, and all the tools performed as expected.

The color gamut on Kamvas GT-156HD V2 might seem a bit dim while providing a high contrast, which is important for artists and editors. I could see clearly tiny shades and work out precisely the spots I needed.

By its parameters, the tablet is similar to the Wacom Cintiq. Both models have good resolution and ergonomic styluses. The Huion, however, has more pressure levels recognized by the pen. The Wacom also has less shortcuts, while the Huion offers a rich interface. The hotkeys can be fully customized for each software. At the same time, the Huion’s pen isn’t tilt responsive, while the Wacom’s one reacts to a 60-degree tilt making the drawing more natural.

The pen has 8192 sensitivity, and the response is a top-notch one. I could draw fast or slowly, put more or less pressure—everything reflected on the screen with precision, and at no lag or jitter. Lines kept their structure well. Working with the color ring was simple, the stylus picked the color tint exactly and reacted fast.

I appreciated the touch-sensitive bar in between the hotkeys as well. It let me zoom in or out of the picture quickly, and establish the zoom range I needed.

The tablet is solidly built, has a good weight and feel. Its working area is 16 inches in diameter and feels natural to touch. The stylus is rechargeable, with an ergonomic shape. It sits well in the palm, and the onboard keys are handy to use.

There are 14 keys in total letting you make shortcuts to nearly all effects you usually implement. Eight express keys are arrow touch rings and six are simple keys.

The stand supplied with the tablet deserves a special place in the Huion Kamvas GT-156HD V2 review. It’s aluminum, with multiple height positions, a bottom support for the tablet. There are also non-slipping soft stripes on each side of the stand to prevent the tablet from skidding. Besides, it’s foldable, and takes no more space than a thin book.

I highly recommend this drawing tablet for any artist or editor. For a middle price, it offers high sensitivity, multiple hotkeys, a vivid contrast screen with the no-lag response. The tablet is a plug-n-play model, and works well with multiple software. It lacks some features of its closest Wacom competitor like a pen tilt, but instead offers a wide array of comfort features including the touch bar, the sturdy stand, and the overall high quality of build.