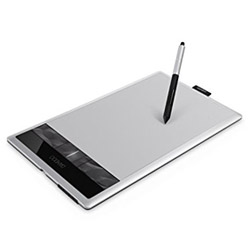 Two-sensor technology enabling to manage the tablet with the finger touch, along with the standard pen control, is the key feature of the Wacom Bamboo Pen and Touch review. The tablet also features some of the technologies represented in higher-priced models, like high sensitivity and a wide range of compatible apps. However, the provided functionality has its limits, when it turns to customizing the settings.

The tablet is compact and affordable and fits well for various drawing, painting, editing, and office-based tasks. It lets browse the content, control its representation, add notes, sketches, pictures, while the photo editors will also find the combined pen-and-touch functionality suitable for various levels of image correction.

The setup is quite standard for most Wacom tablets while requiring a bit more time for adjusting the Multi-Touch feature. The Wacom Bamboo Pen and Touch driver can be either downloaded via the official Wacom website or installed directly from the supplied CD. In a few minutes, the tablet control panel is available and can be tuned at the user’s liking.

Apart from the standard tablet orientation setting, the Wacom panel lets customize the Express Keys and adjust the Multi-Touch functionality. There are options for the “dragging” function being performed with one or many fingers, different meanings of gestures, etc. Still, the changes can be introduced only within the Wacom preset modes, not letting the user set the gestures and shortcuts according to the preferences or for the particular software.

The tablet has a textured working area that feels on the pen nib like a pencil on paper. This lets control the pen better and make finer strokes and more accurate lines. The Touchpad functionality isn’t enabled simultaneously with the pen; thus, for scrolling along the picture, the pen should be put aside.

The Wacom Bamboo Pen and Touch specs demonstrate the high sensitivity of the stylus, and the accuracy of input can be compared with more advanced models. While the read speed of the tablet isn’t high, the average speed of hand drawing is lagless, with a pin-sharp representation of each pen touch on the monitor.

The Multi-Touch works well letting scroll through the text, images, and slides with ease, zoom in and out, highlight the fragments, shuffle the pages, etc. Included Express buttons help access the basic functions quickly without using the PC or laptop keyboard.

Like other Bamboo tablets, the Pen and Touch model is lightweight and compact, with a large working area. The pen active area is wider taking 5.8 x 3.6 inches, while the Touchpad zone takes 4.9 x 3.4 inches. The short keys are located next to the working surface, with status LED light situated in between the two middle keys. The tablet is thin yet feels solid due to a high-quality plastic build.

The pen is also lightweight but not small and fits comfortably into the small and middle-sized hand. It has switches on the side and the eraser tip on top (works in the editing software supporting this function). The pen glides along the surface with ease; however, its nib is rather sharp than rounded and requires a bit of getting used to for comfortable drawing.

The Wacom Bamboo Pen and Touch is a good option for beginner editors and artists, featuring Touch control options and good sensitivity and resolution. While missing the wide compatibility and full-range customization present in the more expensive tablets, its affordable price makes it an efficient organization tool for various artists and those who use it for work. 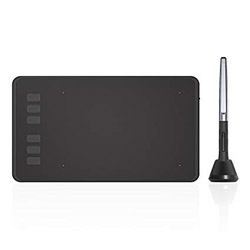